Here I re-publish a rant I made about people who patent code that should have been contibuted to the Opensim project. I have not included all the comments that were made but the article did cause more then a little bit of a stir and the comments which you can read on  Chapter & Metaverse blog make interesting reading. 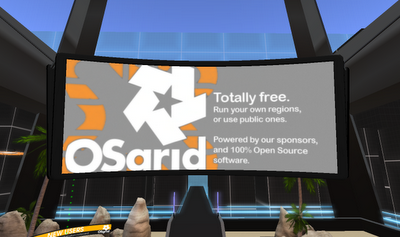 I have been reading a recent article from Deva Canto, an Opensim dev, on her blog in which she makes a plea to developers who build on top of the Opensim platform not to patent their code or it will hinder the continued development of Opensim. She gives a warning too to those who take the open source code which a dedicated core of developers have been working on for a long time and use it for their own business ends and, while contributing nothing back, actually threaten the prospect of a free Metaverse.

She goes on to say,

We are seeing a growing number of grids based on Opensim who's developers take full advantage of the freely available source code. The core developers of Opensim have from the beginning had the goal of building the infrastructure of a free Metaverse for the benefit of private, educational and business interests alike. Everyone owns it. It is the virtual air we breath and just like polluters, there are people that would strangle the baby at birth for the sake of personal gain.

The dream is very clear; a Metaverse of immersive interconnected virtual worlds. Not walled-up monopolies like Second Life or the twenty or so other contenders for the virtual market. The aim is to have lots of small and large grids sharing a common resource on which to build a rich and diverse virtual super grid. Users will be able to grid-hop as easy as teleporting from one sim to another. The hope is for Common standards and methods to arise for names registering, search, money and copyright protection. The users will be able to hold their own property and wear it and use it where ever they go. All this is threatened by those who are effectively stealing and damaging what belongs to everyone.


you won't gain any friends among some of us core developers (me, at least). You're putting the whole effort in jeopardy. I can guarantee you that if something you patent is critical, I won't stop until I find another way of doing it that doesn't step over your patent.

Not withstanding all this however, Opensim enjoys substantial, and growing support, and there are many new grids emerging built by people that heard the message given long ago by Linden Labs; A virtual world built by the residents and for the residents. OpenSim is not a walled garden. It is open and free and it will cost the individual a lot less to build and express their creativity. Those wannabe Grid Barons will only ever make it more restrictive and expensive for everyone and that's the author's opinion.
Posted by Talla Adam at 10:13