ZanGrid to join the Hypergrid And Other Metaverse News

On the 1st February, Zandramas becomes ZanGrid and the Club region will open to Hypergrid visitors so ZanGrid is set to join the open Metaverse and start welcoming a whole new bunch of visitors. 3rd Rock Grid showed the way last year and, after many months of agonizing on the merits and risks of Hypergrid, and working to persuade their residents that it would benefit the grid, they opened up a number of regions and gave their residents the option to be open or remain closed on an individual basis. 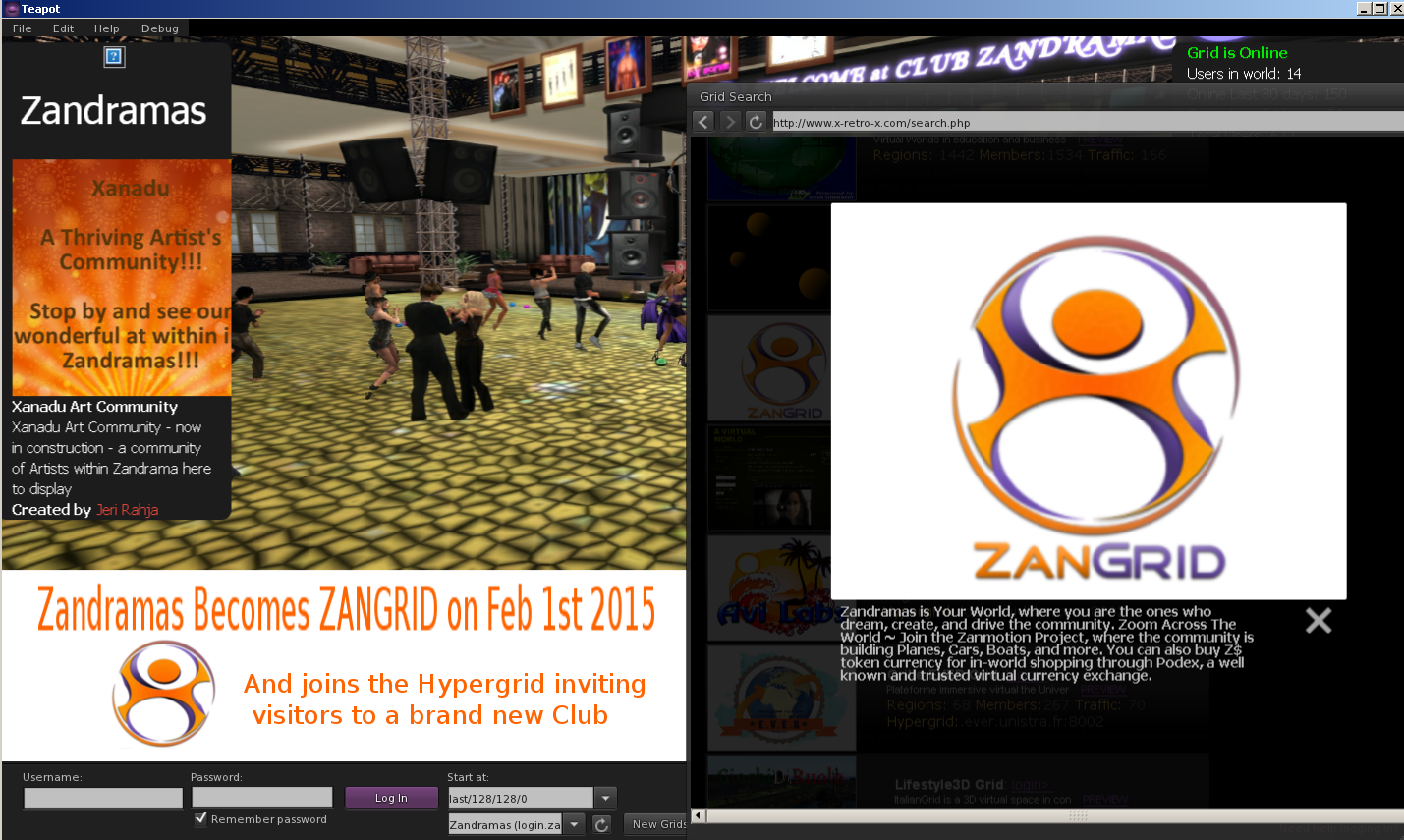 Butch Arnold, CEO of 3rd Rock, said their grid is seeing more traffic since they opened HG and some visitors have registered accounts with us. I told Butch I see your traffic is up some and he replied, "it is indeed.. almost doubled since October." The grid uses partial Hypergrid which blocks most content leaving the grid other than note cards and landmarks. Anything can be brought in of course so that includes deliveries from Kitely Market but Butch told me they are still working on their system.

ZanGrid has the benefit of seeing the success 3rd Rock is making of its entry into connected worlds of Hypergrid and, no doubt, they will look closely at their achievements. In any event, I am certain ZanGrid will see a boost in visitor traffic.

OV will be holding a meeting for the pledge makers to discuss the current Crowdfunding project to have llLookAt and llMoveTo fixed. 3rd Rock Grid  was chosen by me to hold the first meeting and Butch Arnold said he was happy to offer a venue and any help they can give. I'm drawing up a policy (or charter) to present to the pledge makers which sets out how we will operate the fund.
Everyone is welcome to attend the meeting though but the first part will not be open for general discussion. I want to make sure the pledge makers have their say and get to decide how we proceed. Once that is out of the way then I'll invite the audience to ask questions and engage each other in debate if they wish to.

The pledge makers who have confirmed by email are as follows...

The meeting at 3rd Rock grid was fruitful and went well. Turnout was about 20 from other grids including all but one of the Pledge makers. They all teleported in successfully via Hypergrid. Apart from the loss of some attachments like hair everything seemed normal and relatively lag free. There is a log of the meeting posted here on it's own page together with a video from Fred Beckhusen illustrating the issues the Crowdfund is being raised to try and address. Opensim United also posted the log and pictures.

Michael Sietz (Digital Worlds Group LLC) has also raised his pledge to $350 bringing the fund up to the target sum of $2000. I regret no more pledges can be accepted now.

Follow-up news on the Crowdfunding progress will be posted to the Crowdfund-log page on this site so please stay tuned!


Closed Grids & Hypergrid traffic neck & neck but every way is up!

Ever since Maria Korolov published last month's traffic metrics on Hypergrid Business and declared that the Hypergrid worlds now were leading in total visitor traffic I have been watching our own Grid Search metrics closely. Our search engine updates all the metrics twice a week presently and displays a breakdown of which part of the Metaverse is getting the most traffic. Last month, according to HB, the combined closed grids figure was down below that for the combined Hypergrid worlds. But according to Grid Search, which tracks the most active grids, the none-Hypergrid worlds are still leading. In fact I have noticed a recent surge in Inworldz traffic which is helping to keep the none-HG grids up above the enabled grids.

The value of these metrics is questionable however and it has been pointed out that the closed grids display only unique logins while the open grids display both unique logins and Hypergrid visits which skew the figures. What they say is the same person might login at their own grid then visit other grids via Hypergrid thus pushing up the numbers if they get around a lot of them. On the other hand, people say the closed grid owners create large numbers of alternative name accounts and log them in just once a month which also skews their figures too. Other's just ignore all this and look at the trend which is generally positive in any event.

But today's figures were amazingly close regardless. They are as follows...
Total Active Grids: 188 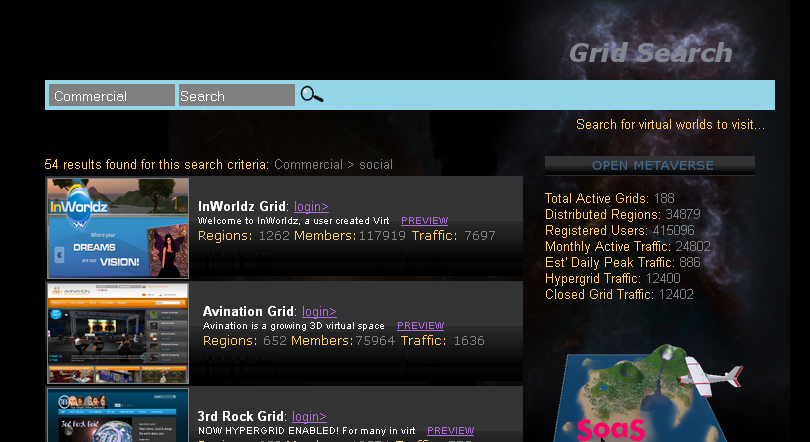 You can take these numbers any way you like but they are drawn from the grid splash pages either manually or by our scraper program. incidentally, I recently made some code improvements so I could start to display individual regions of interest too and I will be looking at the code again with a view to increasing the number of splash pages the scraper can read so we can run it daily. Not only will that save me a lot of work it should be possible to show which grids are online or not.