Kokua Imprudence Viewers: Where to Now?

The Kokua developer team has just posted an announcement stating what they now plan to focus on. Here is the list they published...

I was, in fact, beginning to wonder if the Imp/Kokua team was on the point of breaking up so it was a pleasant surprise to read the latest news. To be fair they did ask for user comments on what they thought the team should concentrate on at the start of the month but I was very late seeing it which probably reflects how far down in my consciousness they had sunk. Well, I did have high hopes at one time that the Imprudence team would come up with a solution to a pet wish of mine - improved grid manager - and, to date, it has never happened despite some noises during the past two years that alluded to the possibility it was being worked on - maybe.

Regardless of all other options I think it is vital that the Imp/Kokua team maintains and even increases their support for the Opensim and Aurora-based grids. The open Metaverse is expanding steadily and hypergrid travel is on the increase so we need a viewer that gives maximum support. Second Life is well catered for with something like 10 TPVs and the V3 official viewer but the open Metaverse is reliant on just few usable viewers including Imprudence which is probably the most widely used for Opensim. Personally, I think we have to move on now and Kokua is perhaps the best way to go if, and ONLY if, it puts a renewed focus on Opensim apart from support for many of the things expected of a V3-based viewer such as Mesh, Mesh upload, Moap, multi attachments etc. Making it possible for users to configure the UI windows, buttons and menus goes without saying but the kind of support that the viewer can give the open Metaverse should, MUST, include a Grid Search function to replace grid manager where grid owners can add their own grid address, info and logo/image. Currently, all the grid owners have to explain to noobs on their web sites how to add an address and it is probably a serious stumbling block to recruitment.

What I would like to see is an improved grid manager with a search function and method for grid owners to add their own grids and standalone sims so new users don't have to add grid addresses themselves which a lot wont have a clue about but rather they can simply enter some key words to find grids of their choice. You need a registered name to login of course but why not allow logins to hg-enabled grids by adding the hg info to the user name regardless? That is, for my name, Gaga Gracious@hg.osgrid:80 for example. The grid manager could do this and I would log into OSgrid at a Plaza without having my name actually registered there (technically, I realize there are problems to solve in this method like obtaining login authorization via a back end data server but I feel sure it can be done). I think this could be the single most helpful feature that would benefit Opensim users and grid owners as a whole. By this method the grid list would always be up to date and noobs would never need to enter an address. I believe grid owners would welcome this feature and promote the viewer since they would be able to direct their new sign-ups to it knowing their grid is already featured and set up to go. No more need for grid owners to get someone to tweak the grid list and release a cloned viewer that does nothing for the Metaverse as a whole but is doing exactly what I am saying - only just for their own recruits. The sort of thing that would suit a grid Like SpotON3D that has no interest in supporting the rest of the open Metaverse unless they are in overall charge and profiting by it.

For the rest of us who believe in a free and open Metaverse where there is room for commercial interests and those who prefer mutual sharing then we need a viewer that is built with features that support multiple grids. The problem is, of course, the developers have their own preferences and ideas about what makes a useful viewer and not every developer is capable of delivering workable solutions to the huge wish list out there anyway. Even worse is that all to often we find that some, not all, but some developers suffer bouts of egotism especially when dealing with one another and cause projects to go awry and even fail possibly leading to a break up of the team. Some have even used their coding skills to hack and do bad things - Emerald Viewer being a case in point. But, with those cautionary words said I do think the Imprudence team genuinely want to work on solutions their users really want.

I have been plugging away at the grid search idea for a long time. Two years ago I asked for it on the Imprudence forum and the response was positive yet nothing has happened to date. In the last year I became involved some with the Aurora development team and the lead developer, Revolution Smythe did actually agree with me and went so far as to recommend work be done on Astra viewer to explore the grid search idea. Rev thought Grid Hop could be used and actually did some work changing the grid manager window in preparation but adding Mesh support seems to have occupied the developers since that time and, while I still get promises that the grid search feature is on the work bench, still nothing has happened to date. So that is where we stand and I can only hope the Imp/Kokua team do actually revisit these ideas.

The open Metaverse needs it's own viewer. That's what I think and sure it can be compatible with SL but the focus needs to be on Opensim grids. Too many developers, and I think some members of the Opensim team are guilty of this too, slavishly follow developments in Second Life as if they were the benchmark for virtual worlds. The grid manager and search would benefit the whole community and be a highly visible statement that Opensim can stand on it's own and become the prefered platform of the free Metaverse. 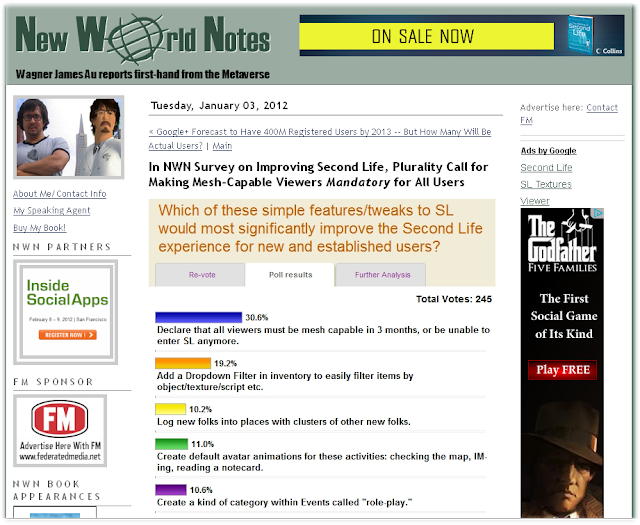 Open Metaverse: Looking Back to the Future!

So this is 2012 and, before I launch into looking back at what I got right and wrong with my 2011 predictions last January, I have to mention some good news for Mesh fanatics desperate to see their beautiful mesh clothing move with the same grace as their pixelated bodies. I wrote about a crowd funded project back in October which was my last post for several months due to heavy commitments elsewhere. Anyway, the project was organized by Second Life residents who where frustrated by Linden Labs tunnel vision and lack of action. They raised money to pay a bounty to Karl Stiefvater, better known as Qarl Linden from his days at the Lab, to develop a parametric deformer, which will cause mesh clothing to fit the avatar shape and move with it more realistically.

Well, Karl has finished some preliminary work and put up a video to demonstrate things. Karl emphasis this is a first look and far from complete. The "heavy lifting" part is done he says but "I’m giving it to you in this form now, so that you can give me feedback. There are decisions to be made which we should make together."

Here is the demo vid and the source code is here. Feedback can be given here.

Anyway, I think I will leave it to the grid builders to predict for themselves where they are going.
Let me just wish everyone a prosperous New Year.
Tweet
Posted by Talla Adam at 10:40 9 comments: