Linden Labs At War With Opensim! 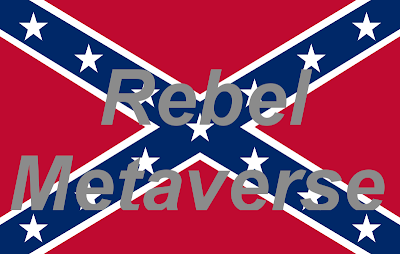 You will forgive me for opening this post with a little dramatics, the rebel flag and all, but read on and you will see why. Linden Labs has been firing shots at Opensim for some while now and I don't just mean a war of words here. The Lab is taking an aggressive stance with direct action now where, in the past, they seemed not to care too much. They were big enough to ignore the upstart. But the story has taken a new dark twist and the knives appear to be out and pointing.

For many month's now we have been witnessing the steady decline of Second Life losing up to a 100 or more regions a week. Linden Labs has lost close to 2000 sims since the start of last year and that represents an awful lot of money in tier payments. In an interview with Botgirl Questi, Zombie Linden agreed that last spring Linden Lab said they were going to cut off access to emerging SL features unless third party viewer developers stopped linking SL customers up with Opensim grids. In the interview Zombie Linden complained, "It didn't make sense to give technology weapons to the 'rebel' grids they could use against us." He went on, "Business is war isn't it?"
Botgirl's Identity Circus: Interview with Zombie Linden on loginURI Controversy

Botgirl reminded Zombie Linden that the Lab use to encourage open standards and wanted other grids to do the same. In deed, Linden Lab was fully engaged at one time under the direction of Mark Kingdom in developing the original inter grid teleporting between SL and Opensim. Hypergrid teleports and the notion of an interconnected open Metaverse grew out of those experiments. However, the Lab has clearly run up a flag of war now, and using language to match. The Opensim grids are Rebels they declare - all 200 of them, or 200 at least known to exist at this time. And growing! Business is war in their words and they are at war with the open Metaverse!

Zombie Linden went on to say the Second Life community is dysfunctional and thrives on drama which, when Botgirl put it to him the Lab would rather stir up drama than worry about releasing new features and fixing bugs, he didn't deny it. In fact he had already said rather cynically, "The more drama we create the more time and money people spend on the grid." He even dismissed Linden Realms as a lame feature!

Reading the log of OSgrid's resident Town Hall Meeting the LoginURI controversy was a hot topic with many points of view being aired. Basically, given the Lab's decision the main issue was what would happen with the viewers and would some developers toe the line and turn their back on Opensim. Firestorm/Phoenix developers have already stated they aim to produce two viewers - one for Opensim and one for Second Life but no one yet knows how rigidly Linden Labs will enforce their policy. It could be the TPV (third Party developers) have to chose which viewer to work on with no option to work on both, even separately.

The issue is, of course, the grid manager and the Labs changes they aim to make in the viewer code to enable client-side Havoc physics. But clearly, that is only part of the argument. Linden Labs want to curb Opensim development because they are losing out to it more and more. Before, while the Opensim server code was still unstable and buggy, the Lab didn't care too much but the platform is far more stable now and easily starting to rival Second Life. Declining traffic to the Second Life grid and the huge loss of sims is taking it toll. The Lab has run out of patience and the directors want action. That clearly comes over in the Botgirl/Zombie interview.

The Second Life grid has been changing too as it declines. A full 12% of the regions are dedicated to Adult content and this includes gambling, a fact probably not gone unnoticed by parents and teachers for Linden Labs, in a change of policy last year closed their Teen grid and allowed children onto the main grid - albeit under supervision. But, kids being Kids and computer savvy they quickly get round restrictions and the age verification process was found to be a total farce anyway.

Linden Labs is obviously pointing a finger at Opensim grids stealing their customers while they should be looking closer to home for all their bad decisions, contempt for their residents, and a shockingly expensive and poor,  service.

Opensim is growing while Second Life is declining and perhaps the single greatest reason is the low cost of Opensim hosting. But there is more, anyone can use the open source software and set up a virtual world for school, business or just a private home, role play game or small club hangouts. Linden Labs could have opened some doors to Opensim people and fostered cross-grid cooperation and mutual support. The Lab could have been at the heart of the open Metaverse but instead it chooses war with it in pursuit of profit. Trouble is, not everyone in the Open Metaverse is bent on commercial interest and the Lab is not up against just another rival company. They are up against many companies and many educational institutions as well as a whole bunch of individuals getting on with their private  and affordable interests.

Dose Linden Labs really want to go to war with people, many of whom are actually still their customers?
Posted by Talla Adam at 10:05 23 comments: